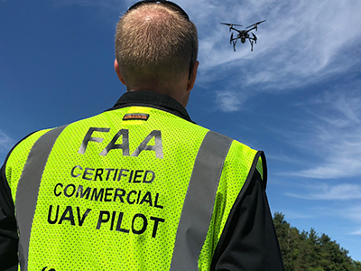 The SkyOp Ultimate Drone Reference Guide is a proprietary cloud-based platform which is used to guide interactive educational curricula and has evolved into a unique tool enabling SkyOp specialists to lead enterprise corporations through the process of exploring and implementing in-house drone programs.

Entrepreneurial minds find inspiration in many places. For SkyOp LLC’s Co-founder, Brian Pitre, a faithful copy of Wired magazine launched a journey into the then-nascent drone industry that has grown into a diverse service offering.

“I spent a career in the computer business starting in the punch-card era, then in 2012, I came across a Wired magazine story titled ‘DIY Drones’ and that opened my mind to the innumerable applications of aerial drone technology,” recalled SkyOp Founder and Chairman Brian Pitre. “I spent hundreds of hours devouring every internet article about drones, and I eventually had the realization that drones, like the personal computer did years before, were going to totally change the way we do business.”

With the rapid evolution of technology, Pitre saw drone platforms as a new and exceptionally-positioned data collection tool. Before drones were a mass-produced commodity available on electronics store shelves, Pitre knew he needed to experiment with the aerial UAVs before he could find the ideal commercial uses and applications for the platform.

“Back in 2012, only a handful of manufacturers were building drones in all of North America,” Pitre said. “I spoke will all of them before ordering a custom rig built to my specification. It was state-of-the-art by 2012 standards, and ultimately came with a $15,000 price tag.”

This is the price of early adoption, but once Pitre took delivery he realized there were few resources available to teach pilots how to fly their drones so he launched into a trial-and-error process to teach himself how.

“I refer to that time as my trip through the School of Hard Knocks,” a chuckling Pitre said. “Inevitable crashes meant I learned how to repair the machine as well.”

Fast forward to 2020, Pitre’s SkyOp has been a leading training outfit for commercial drone pilots for seven years now, and this summer the company launched its new Enterprise Drone Consultancy to help large-scale corporations explore and implement the unique advantages drone technology can delivery.

One of SkyOp’s unique tools is its proprietary cloud-based Ultimate Drone Reference Guide. Originally developed as a platform from which it coordinated its training courses, the Guide has evolved into a multifaceted platform through which SkyOp delivers courseware for educational institutions that license its high school and college drone STEM curricula, and now, to guide corporate executives and their engineering teams through every aspect of developing an in-house drone program.

“When we show our Ultimate Drone Reference Guide to people in the drone industry, people in the know, they are amazed at the collection of knowledge and tools we have put together,” Pitre said. “The Guide is not only an electronic textbook of all things drone oriented, it’s also our vehicle for delivering constantly-updated and expertly-curated intelligence to the enterprise corporations with which we work. Maintaining the Guide is a massive undertaking with the rate at which technology is changing so rapidly.”

Since its launch, SkyOp has been operating on Pitre’s favored “lean startup strategy” in which he has deployed a single service to market, gathering reaction from potential customers to fit those services to their unique needs, and then expanding to meet the demand.

“When I launched in 2013, I expected to take six months to do some public speaking, and talk to everyone I could in applicable vertical markets about drones uses,” Pitre said. “At the time, I identified 86 vertical markets that I expected to be interested in drone applications. It didn’t take me long to realize just how wrong I was. There were in fact thousands of markets, and the most impactful drone applications had yet to be invented at the time.”

Nonetheless, Pitre’s anticipated six-month tour turned into 18 months on the road exploring how varying businesses would or could deploy drone technology to their advantage.

Then, in 2014, Monroe Community College, in Rochester NY, reached out. The school was researching the launch a drone training program. By October of 2014, Pitre had written an 18-hour drone pilot training course, and the school sold out the first class with 18 students. The confluence of Pitre’s research, and the bourgeoning demand for skilled drone pilots was happening in real-time. Several years later, SkyOp has expanded its drone training from offering certifications for individual pilots, to offering a customizable curriculum for institutional STEM education, and to training of in-house corporate pilot teams.

On its journey, SkyOp continued to find additional validation for Pitre’s initial drone awakening. In 2016, the company entered the GeniusNY.com competition, competing with 250 unmanned systems businesses and big data startups from 20 countries around the world for a $2.75 million accelerator pool. SkyOp was named a finalist in the competition giving Pitre and the company access to the Genius NY accelerator program and an infusion of $250,000 of new capital.

Pitre put the capital to work on the next phase of his lean startup plan and built a curriculum he could license to high schools and colleges looking to offer a drone-based STEM program to students. While many schools were incorporating drones into their robotics curricula, Pitre envisioned a pilot program that looked beyond simply building toy drones, and instead ensured graduates were equipped with the necessary skills to join the high-demand drone pilot workforce immediately. That meant developing instructional tools for teachers, themselves unlikely to be drone pilots, to teach flight skills, as well as practices for data collection and proficiency with a diverse array of data manipulation and analysis software used throughout the industry.

The SkyOp Drone Training STEM Curriculum saw steady growth annually, and in 2019 the company signed a cooperative purchasing contract statewide with the New York State Board of Cooperative Educational Services (BOCES) to provide significant cost savings to school districts looking to implement its curriculum. Despite having to manage amidst the current global pandemic, schools had already formulated budgets and received grant funding which helped support the program’s launch at 30 high schools in 12 states across the US. To help streamline all of its training and enterprise consulting clients, SkyOp has developed and expanded its “virtual classrooms,” long a staple of its process, to ensure the most seamless experience for students and clients alike.

“2020 has been a strong, though strange, year for us,” said Pitre. “While we have a continued our focus on building internal drone programs for corporations, we’ve continued to help other institutions establish drone programs as well.”

In the last two years, SkyOp has consulted and trained pilots for a large power company looking to develop a drone inspection program for its line maintenance division. SkyOp ensured line workers were able to leverage aerial inspections to not only speed up the inspection work, but to help keep workers from having to climb the giant transmission towers. Pitre sees these applications as just the beginning, and anticipates increasing interest in deploying drone technology from power companies.

“What still amazes me about drones is they are still a transformative technology. Just like the computer found universal applications throughout business environments, drones are changing the way we do things from utility inspections to, eventually, delivering packages. There are still so many unknown applications for drones, but there are few sectors where we can’t envision drones making the work faster, easier and safer.”

We’ve seen significant adoption from larger construction companies,” said Pitre, “In fact, in the very first class I ran at Monroe Community College, there was a crew from a local construction company that took the course. The company started sending their engineers to us for drone pilot training.”

Pitre realized just how impactful drones could be for the businesses he was training when he asked that local construction outfit be part of a use case study that he could use to sell SkyOp’s offerings in the sector.

“They were very nice about it, but the conversation was a nonstarter with them,” said Pitre. “They said, ‘We really don’t want our competitors to realize the cost advantage that drones give us,’” Pitre said. “We’ve found that to be a regular theme through the businesses we train. They are seeing such a competitive advantage with drones that they want to hold that edge as long as they can.”

As an authorized Federal Aviation Administration (FAA) Knowledge Testing Center, SkyOp is able to offer drone certifications as well as FAA certifications for commercial pilots, jet mechanics and more. While SkyOp’s drone training always includes hands-on flight hours as well as knowledge of rules and regulations, Pitre says the FAA’s certifications do not require students to fly a drone.

“I’ve been vocal about my feeling that the FAA should require mandatory flight time for drone pilot certifications, because the current process is the equivalent of giving a driver’s license to someone that never sat behind the wheel,” said Pitre. “I know that anyone who has graduated a SkyOp training course has the flight skills necessary because we’ve tested them on those proficiencies. This insistence is one of the reasons that corporations choose to work with us to train their teams, they know that we’ve certified every aspect of their pilot’s skill set which is invaluable to company leadership, as well as its insurers.”

Pitre noted that one of the biggest challenges to growth in the drone industry is the FAA’s tight control of any aspect of drone flight. While businesses continue to dream of a future where drones are a regular sight over communities, the FAA is only now allowing very-controlled beyond visual line of sight, or BVLOS, deployments. Without hard-to-get FAA approval, drones are currently limited to missions where the operators can see the drone at all times.

“Some businesses are chomping at the bit to be able to fly for 10 miles, collecting the data that they need. But, with some very specific trial exceptions, you can’t fly beyond the line of sight,” said Pitre. “While these limitations are changing rapidly, we point our customers to the benefits they can realize even under the current regulations. By conducting these longer flights in smaller segments, they still realize the efficiencies, and jobs still get done very effectively.”

These BVLOS restrictions are also what has limited the desires of major drone adopters, like Amazon or Walmart, from delivering packages outside some early demonstration programs. But these barriers are quickly being addressed by some of the major corporations looking to realize these cutting-edge applications.

Skyward, a Verizon company, which among other services has developed a software package to provide operational controls for drone programs, commissioned a study in 2018 to research the return on investment for commercial drone applications. Its research found that 92% of respondents saw a positive return on their drone investment in the first year.

“If you take a serious look at the capabilities of drones, and that’s one of the key first steps through which we guide our enterprise-level customers, pretty much every business will realize the competitive advantage drones can deliver,” Pitre said. “We spend a great deal of time educating businesses on the potential effects drones can have for their business, and usually once they see the efficiencies, worker safety impacts and sheer depth of data analytics they are missing, a light just clicks on.”